Imini Chronicles 2009: Day 3 (Wednesday) – Jesus is the King of Kings and Lord of Lords 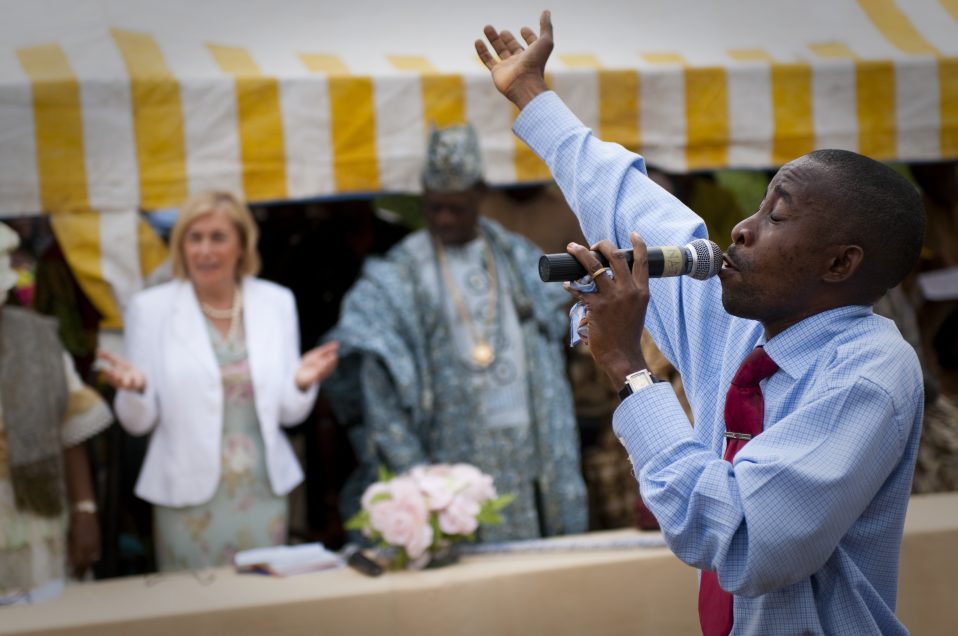 The Moniya Trading Association felt the ground shaking, there was something going on a couple of kilometres down the road. The Poly and UI student buses accompanied by New Covenant Church

vehicles frequently plied the road. A coaster stopped in front of a market stall and the female conductor beckoned the Omo Oni card towards the bus. If only the man knew what he would encounter, he would have been better prepared for the experience. MTN 1,000, Etisalat 500, Glo 2,000, another MTN 1,500. Two Glo 500, 3 MTN 500. He was confused. Who does he respond to first?  Bring ‘change’ echoed through the doors. Please scratch the card, another requested. He stood still perplexed. One at a time, someone advised. We got there at the end. He left a happy man. It seems phone credit drains, along with the mobile phone battery in Nigeria. You need to daily recharge. What a rip off. Everyone needs a BB jooo. Let’s all ping each other and smile.

Back to the more serious stuff, we entered Imini Village with a high level of expectation. We were expecting God to do something extraordinary. We had a vision – 1000 new disciples and the King of Imini to profess Jesus as his Lord and Saviour. Our strategy was to pray, praise, plan, prepare and participate. Robert left London two weeks ahead of the team. He spent 6 days and 5 nights in the village what a story he had to tell. Drums heard beating in the forest at 3 am in the night. Robert aka “Oluwarobotimi” was a great blessing to the teachers and children alike. He was our John the Baptist who went ahead to prepare the way. The ground had been ploughed ready for the seeds to be sown.  The hearts of the children had been prepared for the Tuesday experience. 35 from England, 4 from USA, volunteers including an ophthalmologist with the eye clinic, hundreds from the host conference centre and a strong team from the Ife Conference who staffed the Eye Clinic. There were also some Jason doctors who participated in the programme. We were all expectant.

As we drove into the premises in the morning, I saw the Children’s tents filled with children. One of the malus by the tree was missing. Who let the cow out? I wondered. Where had it gone to? The main auditorium was also filled with people. The doctors, nurses, opticians, ophthalmologists, dentist, cervical screening nurses had all set up. By now the medical team had arrived in full force. The counsellors, security and protocol personnel were slowly moving into position. In the midst of this all, I could smell the aroma of jollof rice and fried meat or was I just hungry at 10.00am.?

The programme commenced with high praise. Pastor Soji, the event coordinator welcomed everyone to Imini. This was followed by a ministration by a Bata dance troupe. Their costumes were colourful and their steps quick. It was a mixture of the Charleston, jive and quick steps. It was glorious. They were professionals who danced as David danced. 10, 10, 10, 10 would have been on the scorecard if it was a Strictly Come Dancing event.

Baba Ajao, preached a message from 2 Kings 5. It was direct and to the point. He went straight for the heart. While the preacher spoke, the King listened attentively. Each word was convicting by the power of the Holy Spirit. The altar call was made. The king sprang to his feet and walked forward to profess Jesus as his Lord and Saviour. Mummy Kate burst into tears. Mrs Asuni dropped to her knees while the woman beside her fell flat on her face. The angels rejoiced in heaven. The demons flee back to their abode in hell. Another 500 people surged toward following their leader to accept Jesus.  The front was filled with a sea of people ready to start a new journey with Christ. Oba, Ijoyes, Iyalode, farmers, tailors, market traders from Imini and its surrounding villages all made the decision to follow Jesus. The minister led them to Christ with their hands on their hearts as they welcomed Jesus into their lives.  Hands were placed on their head and other parts of their bodies as they prayed for healing and deliverance. The king was quite fervent in his utterances. He never missed a word. With his head bowed down each word came with strength and power. I’m sure he knew they were being recorded in heaven.

The king was offered a seat. As he took his seat, he took off his hat to pay homage and honour to the greater king – The King of kings and the Lord of lords. What a sight. Baskets were provided for armlets and other charms to be deposited by the new converts. The new journey had begun. On his way out Bro Gbenga heard the King say to Mummy Kate “You have delivered me”. Yes, Jesus has delivered him out of darkness into His marvellous light. E ke halleluyah ooo.

The counselling department was stretched by the number of converts. What a good challenge to have. The harvest was plenty but the labourers were few. The initial plan had to be abandoned and a new one designed as bottlenecks developed. The counselled converts started to trickle through to the medical team for registration and consultation. 100s sat in rows waiting for the doctors. The Optician clinic on the other side of the site was overwhelmed with patients. 85 patients were seen by the Ophthalmology clinic. 21 patients were prepared for cataract surgery for the next day. The two dentists saw 20 patients and undertook 10 extractions. It was a wonderful, glorious, rewarding and fulfilling experience.

In the midst of our rejoicing the bug arrived in our mist. It crept in without an invitation. Did it come with something we ate or drank – the water, fruit salad or fresh salad? Despite wiping our hands with simple wipes and anti bacteria liquid, the stomach pains, lack of appetite, fatigue the list goes on hit the team. First it was Robert, then Ian, Bro Funso, Ibukun, Sis Jackie, Mummy Kate, the list goes on.  It was unbelievable, the number of people who were hit by this. Fervent prayers were said and vows were made by those not affected to avoid stopping by the road side for the conveniences. The team doctors had their hands full looking after the team. We thank God we have overcome and are recovering.

Miss a day? Catch up on the previous day using the link below and make sure you follow the next update in the next few days.

Your ticket for the: Imini Chronicles 2009: Day 3 (Wednesday) – Jesus is the King of Kings and Lord of Lords

Imini Chronicles 2009: Day 3 (Wednesday) – Jesus is the King of Kings and Lord of Lords